In the year 1875 a small group of people calling themselves Baptists met together for worship under a tree at the top of Millstone Hill in the village of Swallownest.

It all started when a Mr William Walker arrived to become the underground manager of North Staveley colliery, known to the local people as “Top-o’-t’-hill”. At about the same time there arrived also a Mr. Watts and his family from the Coventry district of Warwickshire. These, together with other local friends, banded themselves together and began meeting for services of worship under a tree in a field on the edge of the village. 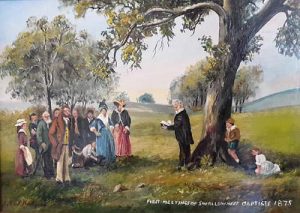 Soon, the little band of Baptists were invited to meet in the home of Mr. John Allsopp, which stood near their meeting place, The congregation would meet in the living room, and the preacher would take up his position at the foot of the stairs.

It was not long before the Baptist Church in Westgate, Rotherham began to take an interest in the infant cause, and plans were made to purchase some land and erect a building in which the church might meet. It says much for the foresight of those church leaders that the site they chose for the new church became in the course of a few years the centre of a growing village.

The site was bought on the 24th May 1875, by Mr Joseph Brown, one of the leaders of the Rotherham church, and on Thursday afternoon the 12th July 1877, the foundation stone of the new Baptist church was laid. The building was erected for the sum of £250, and a little later that same year it was opened for worship.

For several years the Swallownest Baptist church was linked with the church in Rotherham as a mission, and was given pastoral oversight by the minister, the Rev J.Harper. When Mr Harper vacated the pastorate in 1880 the leader transferred the oversight of the new church to the care of the Rev. R. Ensol, the minister of the Baptist Church in Attercliffe, Sheffield.

Despite many difficulties which faced the church, it grew so that in 1892 the building had to be enlarged to accommodate the church and the Sunday School. Progress continued. The church went on from strength to strength and towards the turn of the century a new breath of life came into its activities. It is not until 1902 that a record of the church roll becomes available and at the time the membership numbered 27.

In 1907 the church invited the Rev C. Deal, the minister of Portmahon Baptist Church in Sheffield, to assume pastoral oversight. Mr Deal quickly realised that the building was too small for the need of the growing church, and forthwith set about planning the building of a new church. A building fund was opened, and Mr Deal sought the support of the Sheffield District of Baptist Churches in the new venture. A plan was submitted by Mr J.W. Winter junior, and his father was given the contract to build the church. Originally the estimate for the work had been £750, but after certain alterations had been made to the plans, the final cost of the building was £1048.

The foundation stone of the new church was laid on the 30th April 1908. The new building was opened for worship on Thursday 3rd September 1908 by Mrs W. H. Barnes, the wife of one of the trustees. 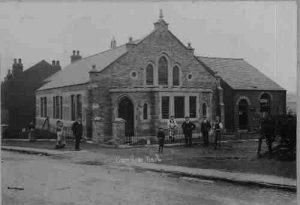 The church building around 1908

Inside the church building, in more recent years, before the pews were removed